It is quite common that where you need to anchor ropes to things, there are no natural things there to anchor to (like boulders). Climbers and cavers get round this by installing bolts and/or ground anchors. A ground anchor is a (hopefully) long length of angle, pole or bar that is driven in deep and (hopefully) can hold a load due to it’s friction with the ground. These are most commonly seen at the top of moorland cliff faces, installed by rock climbers as a top anchor to abseil from or belay a second. As part of the process of looking into developing a mobile zip wire / team building exercise we had decided that some form of ground anchor would be needed. There are a number of options, from home made to high cost but we opted for the tried and tested ‘mooring pin’ approach as used by mountain and cave rescue teams.

Now, just before people get a bit worried, this is not for life preserving! These pins are intended to act as guy lines for a tripod structure in poor, rocky soil.

Myself and Beth hammered the 50cm long 16mm galvanised steel pins in, one to 1/2 way and one to 3/4. Both of these pins came loose with very little force, about twice average body weight. We then drove the pins in up to their necks and set up a 10:1 pulley system from the back of my van, Brick.
The pins held well but at about 300kg they bent and pulled out. Even rigging a pair in a V made little difference, in fact I was dismayed to see my £20 pins bent after about 5 minutes of testing.

The final test involved setting the pins up as done by MR and CRO teams. We needed a 3rd pin so I used a section of what looked like 14mm rebar fencing spike. The 3 pins were hammered in full length in a direct line to the load. A rope was then used to tie each in line, stacking the pins with clove hitches seemed easiest. The force was applied to the front pin which, as it moved forward to take the strain, came tight on the 2nd pin which in turn came tight on the 3rd. The 3 pins worked as one and we were able to pull a force of 4.84kN with no failure of the anchor.
We stopped at that as we were now in danger of breaking the smaller pulleys used in the MA system and my van was beginning to move.

In conclusion:
Good news – the 3 pin method is very strong and would make a suitable ground anchor for guy lines but also, if backed up to a second system, would be okay for rigging safety lines from. Also, fencing spikes are seriously strong!
Bad news – £20 worth of 12 hour old pins are now bent like beech twigs. These just were not up to the job, poor steel. I’ll be picking up some fencing spikes and using them in the future. 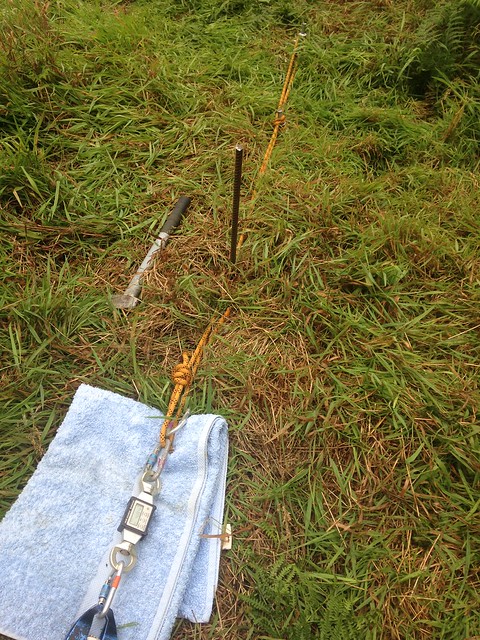 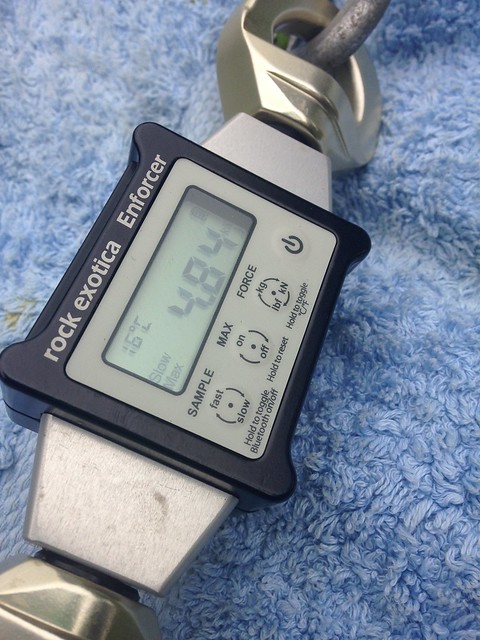