I had an email about a month ago from Shaun at Hitch n Hike. He’d been sent a 70m sample rope from Petzl to evaluate and once it came out of the box and he saw the colour, he knew who to call.

This rope was a 70m coil, sold in an un-shrunk condition. Rather uniquely I think, Petzl will be supplying this rope with an additional 10% of length over the advertised sale length. This is to ensure that the shrunk length is not shorter than the labelled length. So if you buy 70m, you receive 77m.

There are no sold prices advertised as yet but a conversation with Shaun indicates that this rope will come in a little below the similarly spec’d Beal Antipodes 10mm which is so popular as a caving rope.
We opted to reduce the 70m length to a 25m and 45m, both of which were of course 10% longer pre-shrink due to the generous measuring of the manufacturer.
I washed and shrank the rope before allowing it to dry naturally as per usual preparation methods. 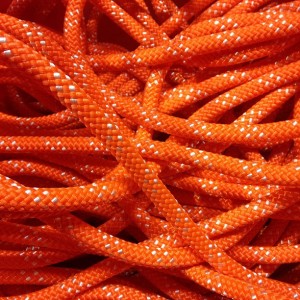 The rope is a fierce shade of orange and in the hand feels supple and easily knotable. This characteristic made for pleasant use and did not deteriorate with a month’s heavy use. It was used in SRT rigging and group management with Italian Hitches and was easy to use in all knotting applications.
The feel is quite like a floating rope as seen in throw lines, sort of hollow. Although a normal kern-mantle construction, the rope would compress down flatter as it moved over karabiners and more importantly, through a Petzl Stop. I don’t have a brand new Stop but it could not be described as heavily worn. The rope crept through the Stop in most applications, including haul and belay. I did have the opportunity to abseil using a Petzl Pirana canyoning descender and found it was a really nice abseil. I suspect this rope has been designed more with those type of descenders in mind.
The rope gets pretty heavy when wet but the water does not adversely affect the handling, certainly no more than any other. It’s been dragged through mud, slate dust and water and still cleans up well.
The rope packs into tackle bags well due to its suppleness but it this does cause a problem for SRT. It does not push well through ascenders and requires some manual feeding at times when a stiffer rope would be pulling through on it’s own.
It does feel quite heavy for it’s size. I’m sure on paper it won’t be much different from Beal or Mammut equivalents but to me it felt heavier than most of my other ropes of similar lengths.

Over the last month the rope has been used as an SRT line, Level 1 handline and belay rope, a ladder lifeline and as a hauling line for rescue. It has been used by me, friends, other instructors and course students.

I like this rope. It is nice to handle, bright and has a good feel. I won’t be purchasing this line for SRT, it is not the right rope for that. I think this is a rope designed for canyoning, where descents are done on figure eights and not generally assisted breaking descenders like Stops. I’d own a few lengths for group work through. It’s nice handling and tough feel would make it a pleasant Level 1 rope. In summary, this is nice stuff but perhaps not as an SRT caver’s rope.